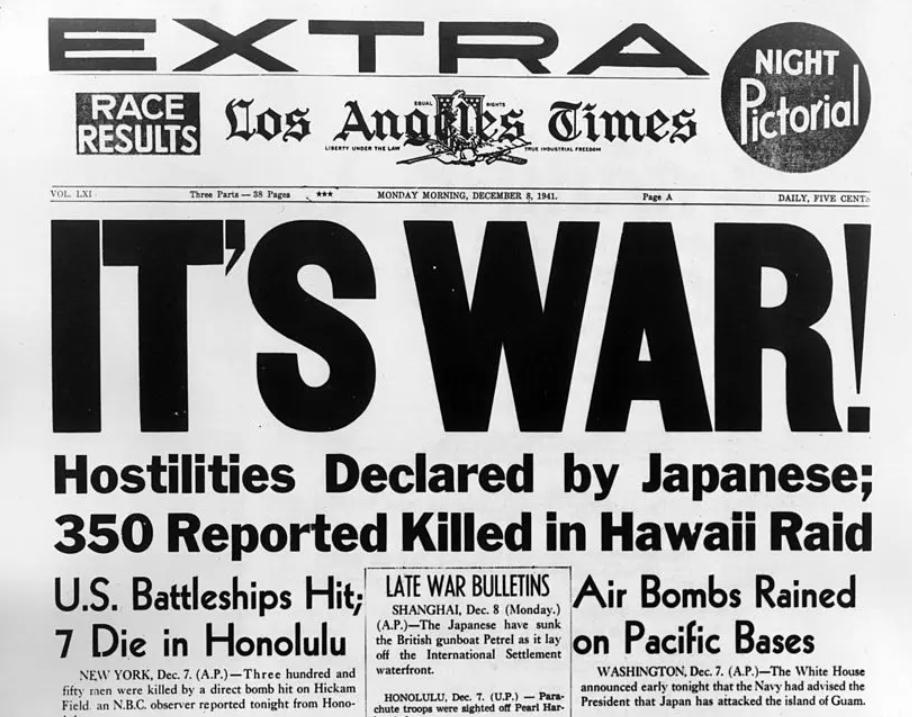 December 7 1941:  A Day That Will Live In Infamy
​A surprise attack on Pearl Harbor and other American-occupied Pacific Islands, changed the course of life for all Americans, and ultimately, the world.  President Roosevelt called on our people to unite. The people of that time rose to the occasion and persisted for years to prevail to what President Roosevelt expressed in his famous "infamy" speech in Congress as "Inevitable Triumph".   ​
Click here: President Roosevelts Speech

Click on picture above to link to the History Channel WW2 segment from "America: The Story of US" series

Click here to read survivor stories
Did you know?

​All of the Americans killed or wounded during the attack were legally non-combatants, given that there was no state of war when the attack occurred.

​The Japanese plan to attack Pearl Harbor was devised by Admiral Isoroku Yamamoto, a former student at Harvard University who had served as Japan’s naval attaché in Washington.

In all, the Japanese attack on Pearl Harbor crippled or destroyed nearly 20 American ships and more than 300 airplanes. Dry docks and airfields were likewise destroyed.

The Pearl Harbor assault had left the base’s most vital onshore facilities—oil storage depots, repair shops, shipyards and submarine docks—intact. As a result, the U.S. Navy was able to rebound relatively quickly from the attack.

In December 1941, after the surprise attack on Pearl Harbor by the Axis-affiliated Empire of Japan, 500 United States Army troops began an occupation of Walt Disney Studios in Burbank that would last for the next eight months—the only Hollywood film studio under military occupation in history. The soldiers were stationed there to protect a nearby Lockheed aircraft plant from the enemy air raids, convert parking garages into ammunition depots, and fixing equipment in large soundstages

Soon after the start of the occupation, Walt Disney was approached with requests from the U.S. services to produce propaganda films.

​During World War II, Disney made films for every branch of the United States Armed Forces and government. This was accomplished through the use of animated graphics by means of expediting the intelligent mobilization of servicemen and civilians for the cause of the war. Over 90% of Disney employees were devoted to the production of training and propaganda films for the government. Throughout the duration of the war, Disney produced over 400,000 feet of educational war films, most at cost, which is equal to 68 hours of continuous films. In 1943 alone, 204,000 feet of film was produced.  Disney was asked to create animation for a series of pictures produced by Colonel Frank Capra for the U.S. Army.