Celebrating the achievements and contributions of selfless people to our American society is followed on both Labor Day as well as Veterans Day.  American military men and women and American workers of any sort are considered to be the driving force of a nation.  Our warfighters protect our motherland and citizens at any cost. Their selfless sacrifices and bravery have saved the lives of many people. On the other hand, American workers help to maintain the economic status of the country but are also important to our veterans -- build the backbone of our military forces through military design and manufacturing efforts, military research efforts, military support agencies, veterans support services and health care, and many other civilian organizations engaged in all levels of labor specifically targeted to support the military warfighter and veterans.  On this day, Labor Day 2022, GLVFA salutes and pays tribute to the services our American labor force contributes to our military and veterans each day.

Labor Day is always observed on the first Monday in September and will be observed this year on Tuesday, Sept. 6, 2022.

Like much in American history, Labor Day’s origins are humble. The first “official” government observance of what we now know as labor day started at the municipal level, where the state of Oregon passed the first legislation to formally recognize the holiday, but wasn’t the first state to observe Labor Day, as we’ll learn below.

The identity of who first thought up the original idea is uncertain. According to the Department of Labor, it was either Peter J. McGuire, a co-founder of the American Federation of Labor, or Matthew McGuire, a machinist who later became the secretary of his local International Association of Machinists lodge in New Jersey.

When Was The First Labor Day?

New York City has the distinction of being the first to observe Labor Day on Sept. 5, 1882. This was done “in accordance with the plans of the Central Labor Union” according to the Department of Labor.
The idea spread thanks to the encouragement of the Central Labor Union, and over time the tradition of observing the first Monday in September as Labor Day went national. Today, banks, government offices, and individual businesses close to observe this nationwide recognition of labor, the labor movement, and its’ role in American history.

Who Is Rosie The Riveter And Why Is She Associated With Labor Day?

A popular song, “Rosie The Riveter”, (written by Redd Evans and John Jacob Loeb) was released in 1942, followed up by a poster campaign (commissioned by Westinghouse) which features an iconic factory worker with her sleeves rolled up declaring, “We can do it!” 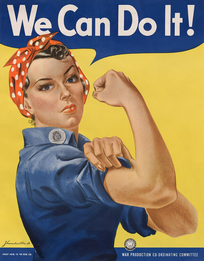 Rosie may not be the “official face” of Labor Day, but she does embody “the strength and esprit de corps of the trade and labor organizations” the holiday is known for, as described by the U.S. Department of Labor.