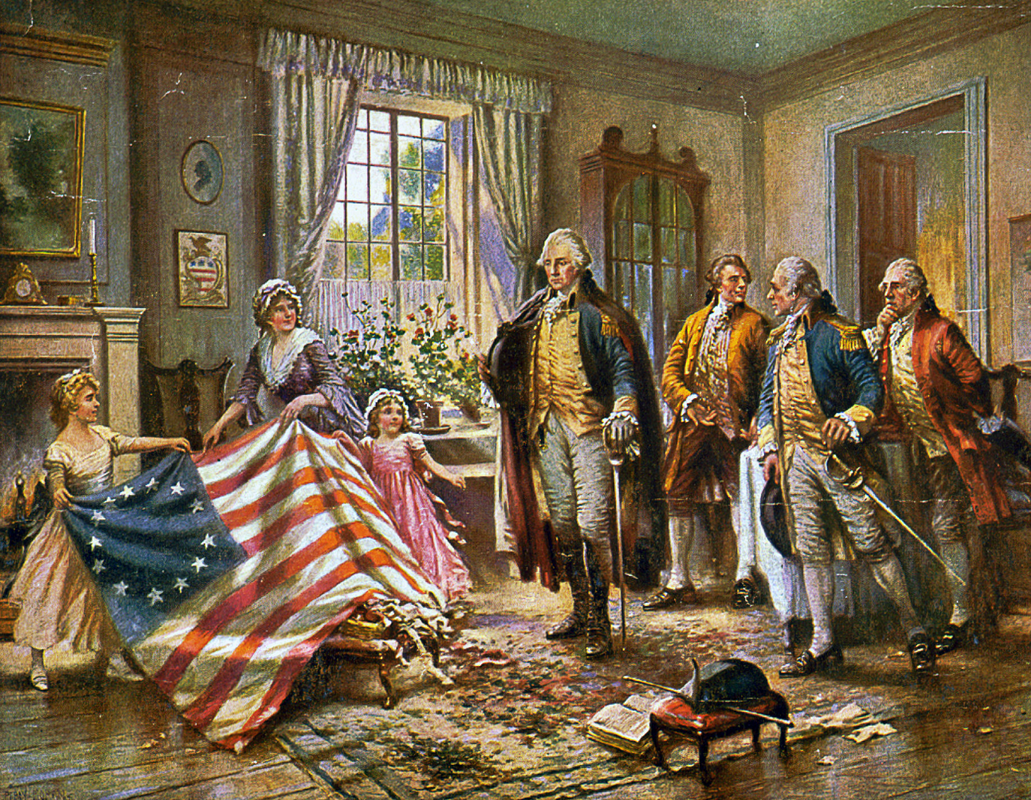 On June 14, 1777, the design with the stars and stripes became America’s official flag with this declaration by Congress: “The flag of the United States will be thirteen stripes, alternate red and white [and]…the union [canton] be thirteen stars, white in a blue field, representing a new constellation.”
​
Did you know?
While many of us learned that Betsy Ross, a seamstress from Philadelphia, was the designer of the flag, this legend has been discredited. According to many sources, President George Washington did visit Betsy in Philadelphia but had brought a flag design with him that contained 13 red and white stripes and 13 six-pointed stars set in a circle.

Accordingly, the only thing Ms. Ross suggested about the flag was to use five-pointed stars (mullets) rather than six-pointed ones (estoiles).  Many credits Betsy Ross for sewing one of the first US flags made out of wool bunting, but historians cannot confirm if she actually made the first flag ever.

Francis Hopkinson flag:  Some credit Francis Hopkinson, a signer of the Declaration of Independence, with the design of the original flag. He felt that he was the designer and should be compensated for it by Congress, but Congress argued that many were responsible for the design, so he was never paid.  Aside from his claim for designing the first flag, Francis Hopkinson was an American Founding Father, judge, author, and composer. He designed Continental paper money and two early versions of flags, one for the United States and one for the United States Navy. He was a signer of the Declaration of Independence in July 1776 as a delegate from New Jersey.
​

The first Flag Act of June 14, 1777, only provided:
Resolved, That the flag of the thirteen United States be thirteen stripes, alternate red and white; that the union be thirteen stars, white in a blue field, representing a new constellation.  ** From the journals of the Continental Congress, 1777

As more states entered the Union more stars were added to the flag. In 1818, Congress passed the Flag Act, stipulating that the flag will always have 13 stripes (one for each of the original colonies) and that a star will be added for each new state on July 4 only.  As you can surmise, the flag changed frequently in the beginning, but hasn’t since the 49th and 50th stars for Alaska and Hawaii were added in 1959.

Parts of the Flag

The Union is the blue field on the flag, which today contains 50 white stars. Each star symbolically represents one of the United States. But no one star by location or position in the union represents any specific state. In the event a new state is added, the flag is changed with the addition of a new star, always on July 4th. The current 50-star flag has been in use since July 4, 1960, after Hawaii was admitted as the 50th state on August 21st, 1959.

Thirteen horizontal stripes alternating red and white, adorn the flag. These represent the original 13 colonies that declared independence from Great Britain in 1776. A red stripe appears at the very top of the flag, and at the very bottom as well.

Proper Disposal Of Worn Out Flag

The proper way to dispose of or retire a flag is by burning. However, this burning should be done ceremoniously, with great respect and discretion. Burning the flag in public can be seen as a sign of rebellion or protest. It is customary to collect the ashes of a burnt flag and bury them with honor.
The best way to show respect for your old flag after retiring is to proudly hoist a new flag. You are showing respect for the flag by always showing it at its best, clean, with bright colors, waving majestically over the land of the free and the home of the brave.

The proper disposal of a worn-out flag for GlenLakes residents is to deposit the flag in the flag disposal box located adjacent to the management office area.   Should the disposal box been relocated, contact the GlenLakes manager to determine its new location.