Since the outbreak of open hostilities with the British in April 1775 (Remember the infamous Concord and Lexington skirmishes?), little consideration had been given to protection by sea until Congress received news that a British naval fleet was on its way.

Congress authorized the formation of the Continental Navy in October 1775, but it was not until November 1775, the Continental Navy was formally organized, and on December 22, 1775, Esek Hopkins was appointed the first commander in chief of the Continental Navy. Congress also named four captains to the new service: Dudley Saltonstall, Abraham Whipple, Nicholas Biddle and John Burroughs Hopkins. Their respective vessels, the 24-gun frigates Alfred and Columbus, the 14-gun brigs Andrew Doria and Cabot, as well as three schooners, the Hornet, the Wasp and the Fly, became the first ships of the Navy’s fleet. Five first lieutenants, including future American hero John Paul Jones, five second lieutenants and three third lieutenants also received their commissions.
​

But did you know that the Continental Navy was disbanded?

During the American Revolution, the Continental Navy successfully preyed on British merchant shipping and won several victories over British warships.  However, at the end of the Revolution, both the Continental Navy and Marines were disbanded in April 1783. Although individual Marines stayed on for the few American naval vessels left, the last Continental Marine was discharged in September 1783. In all, there were 131 Colonial Marine officers and probably no more than 2,000 enlisted Colonial Marines.

After the war, the Continental Navy was dissolved. With the federal government in need of all available capital, the few remaining ships were sold, the final vessel Alliance being auctioned off in 1785 to a private bidder.

What is now known as the United States Navy, our official Navy was formally established with the creation of the Department of the Navy in April 1798, 224 years ago.  From 1783 to 1798, there was actually no official Navy.

Picture to the left:  Flag shown in the picture was the first flag of the Continental Navy also known by various names, as described below.

The "Grand Union Flag" (also known as the "Continental Colours", the "Congress Flag", the "Cambridge Flag", and the "First Navy Ensign") is considered to be the first national flag of the United States of America. Similar to the current U.S. flag, the Grand Union Flag has 13 alternating red and white stripes, representative of the Thirteen Colonies. The upper inner corner, or canton, features the Union Jack, or flag of the Kingdom of Great Britain, of which the colonies had been subjects. 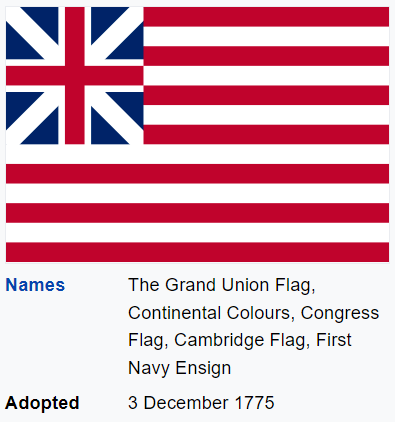